The ocean duelist Mako Tsunami was known for dueling with honor and using a deck that contained mainly sea creatures. He knew the fury of the deep firsthand. His father had been a fisherman who sailed the world's oceans and was lost to the seas. Mako entered the Duelist Kingdom Tournament so that he could win the prize money and purchase a fishing boat to continue his father's legacy. Mako included the card The Legendary Fisherman because it reminded him of his father. 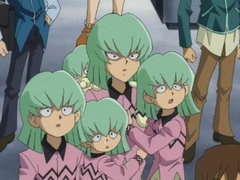 Clash in the Coliseum, Part 3

Yu-Gi-Oh!
Season: 5 Episode 48
Duration: 21:13 Air Date: 05/13/2006
‹ Prev
Our website uses cookies to make your browsing experience better. By using our site you agree to our use of cookies. LEARN MORE.
Accept