Buckle your safety belts – it’s a duel thirty thousand feet in the air as Alister squares off against Kaiba on top of an airplane flying at hundreds of miles per hour! If that wasn’t enough to make Kaiba airsick, the pilot’s missing, the autopilot is malfunctioning and the plummeting plane is on a collision course with a massive mountain! 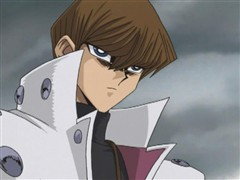 Alister dispatches his airborne arsenal Air Fortress Ziggurat, a mechanical menace that’s not only armed with countless cannons but can also summon a battalion of Robot Tokens! How can Kaiba defeat an endless rank of robots, much less a monster the size of the plane itself? He’s running out of time to think of a plan - the plane is minutes away from crashing!