Yu-Gi-Oh! Fighting for a Friend, Part 1

Dartz launches the final phase of his plan by having his minions of Orichalcos Soldiers attack all around the world, leaving Yugi and gang with no one left to trust! With chaos running rampant, Valon separates Joey from his friends for a final showdown with Mai’s heart on the line! How can Joey beat Valon by himself when both Duke and Rebecca couldn’t even leave a dent in Valon’s armor? 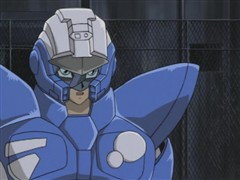 Joey and Valon’s battle rages to its roaring climax as Joey attempts to turn the duel around by augmenting the very same armor that Valon used against him! But is Joey’s strategy just a pale imitation that’s never as good as the original? And there’s also no rest for the weary – after their duel is over, a new duelist is ready to pick up the pieces and battle the winner!