Even with the potent power of Obelisk the Tormentor, the Pharaoh couldn’t prevent the bandit Bakura from escaping! Everyone knows that treacherous thief will return for a rematch, so Seto has a plan to create a powerful army... but not only is his strategy dangerous, it’s inhumane! 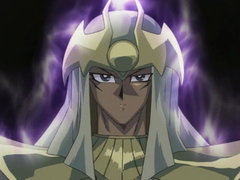 Mahad vows to stop the bandit king Bakura’s sneak attacks once and for all, but he may have made a promise he can’t keep! The bandit Bakura’s Diabound is more powerful than before because it has the ability to absorb its opponent’s abilities! Two entered the underground chamber, but only one will escape in the most dangerous duel yet!